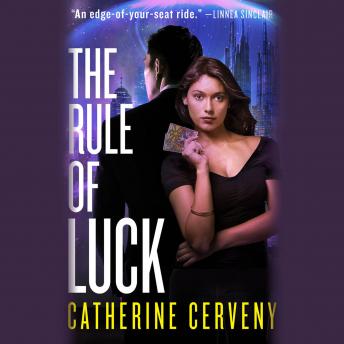 The Rule of Luck: A Science Fiction Romance

The first in a steamy science fiction adventure series featuring a Brazilian tarot card reader and a Russian crime lord.

Year 2950. Humanity has survived devastating climate shifts and four world wars, coming out stronger and smarter than ever. Advanced technology is available to all, and enhancements to appearance, intelligence, and physical ability are commonplace.

In this future, Felicia Sevigny has built her fame reading the futures of others.

Alexei Petriv, the most dangerous man in the TriSystem, will trust only Felicia to read his cards. But the future she sees is darker than either of them could ever have imagined. A future that pits them against an all-knowing government, almost superhuman criminals, and something from Felicia's past that she could never have predicted, but that could be the key to saving -- or destroying -- them all.

'Cerveny's debut blends steamy sci-fi-fi with breathless intrigue and action, all set on a far-future Earth that's equal parts fascinating and terrifying.'-Beth Cato, author of The Clockwork Dagger and Breath of Earth

The Rule of Luck

The Chaos of Luck

The Game of Luck