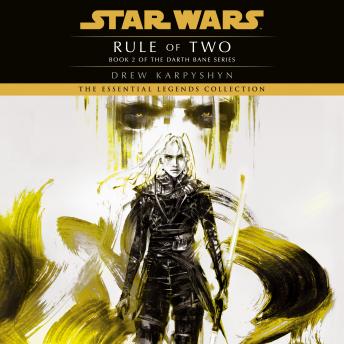 In this essential Star Wars Legends novel, the second in the Darth Bane trilogy, the fearsome Sith lord takes on a deadly new apprentice.

Darth Bane’s twisted genius made him a natural leader among the Sith–until his radical embrace of an all-but-forgotten wisdom drove him to destroy his own order . . . and create it anew from the ashes. As the last surviving Sith, Darth Bane promulgated a harsh new directive: the Rule of Two.

Two there should be; no more, no less.
One to embody the power, the other to crave it.

Now Darth Bane is ready to put his policy into action and thinks he has found the key element that will make his triumph complete: a student to train in the ways of the dark side. Though she is young, Zannah possesses an instinctive link to the dark side that rivals his own. With his guidance, she will become essential in his quest to destroy the Jedi and dominate the galaxy.

These books were always my favorite, and this narrator kills it!

If you are a true fan of Star Wars or of any type of Sci-fi this is the book series for you. You will be thrust into the Star Wars universe and come to understand the way of the Sith and the Jedi on a deeper level than you could ever get from the movies. The narration is perfect for the story of Darth Bane and the beginning journey towards the Revenge of the Sith.

Once you start this audiobook you won't be able to put it down. This is an amazing book and the story line is very engaging.

Great book and narration, really good job on portraying how the Sith are

Such an awesome title! The story of Darth Bane continues. Narrator as always brilliant!