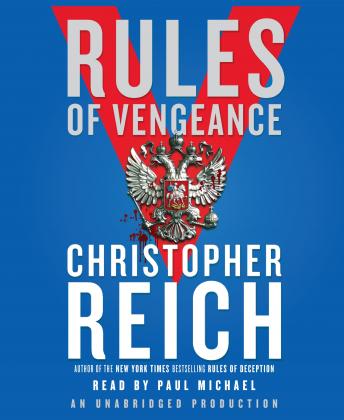 A riveting sequel to the New York Times bestseller Rules of Deception that confirms Christopher Reich as the master of the espionage thriller.
Months after foiling an attack on a commercial jetliner, Doctors Without Borders physician Jonathan Ransom is working under an assumed name in a remote corner of Africa while his wife, Emma, desperate to escape the wrath of Division, the secret American intelligence agency she betrayed, has vanished into the netherworld of international espionage. Both look forward to sharing a stolen weekend in London—until an ambush on a convoy of limousines turns their romantic rendezvous into a terrorist bloodbath.
In the aftermath, Emma disappears and Jonathan is apprehended by the police and threatened with life imprisonment unless he helps secure his wife’s capture. Faced with an impossible decision, Jonathan makes a daring escape. On the run, herealizes that his only option is to become a spy himself in order to track down Emma and discover the true nature of the conspiracy she appears to be masterminding. In the process, Jonathan begins to realize that all along he’s been a pawn in a high-stakes game of international intrigue and one-upsmanship far beyond his imagining.