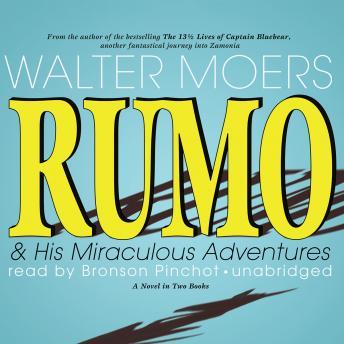 Rumo & His Miraculous Adventures: A Novel in Two Books

Set in the land of Zamonia, this exuberant, highly original fantasy from Walter Moers features an unlikely hero. Rumo is a little Wolperting—a domesticated creature somewhere between a deer and a dog—who will one day become the greatest hero in the history of Zamonia. Armed with Dandelion, his talking sword, he fights his way through the Overworld and the Netherworld. He meets Rala, a beautiful Wolperting female; Urs of the Snows, who thinks more of cooking than of fighting; Gornab the Ninety-Ninth, the demented king of Netherworld; Professor Ostafan Kolibri, who goes in search of the Non-Existent Teenies; Professor Abdullah Nightingale, inventor of the chest-of-drawers oracle; and, worst luck, the deadly Metal Maiden.
Astonishingly inventive, amusing, and engrossing, Rumo is a captivating story from the unique imagination of Walter Moers. Filled with humor, this novel puts a new spin on the usual epic fantasy. The comparisons are many—Douglas Adams, Lewis Carroll, J. K. Rowling, Dr. Seuss, and R. Crumb—but Moers is clearly an original. Long live Zamonia!

Rumo & His Miraculous Adventures: A Novel in Two Books

This title is due for release on November 12, 2010
We'll send you an email as soon as it is available!