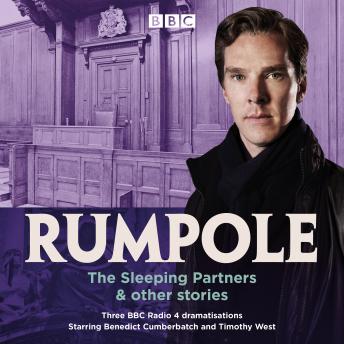 Rumpole and the Old Boy Net: With the help of his new pupil, Miss Phillida Trant, Rumpole must defend Mr Napier Lee, who is charged with blackmail. But the alleged victim of the blackmail went to public school with the defendant, and Mr Lee won't sneak on his old school chum...

Rumpole and the Sleeping Partners: After a legal ball in the Savoy Hotel, Rumpole and Hilda argue about Rumpole's drunken behaviour and Rumpole decides to sleep the night on his sofa in chambers - strictly against the rules. But there he finds his colleague Erskine-Brown with Phillida Trant, 'working late'...

Rumpole and the Portia of our Chambers: Rumpole comes close to giving up the law when forced to consider the path his life has taken by a combination of his attraction to his pupil Phillida, an unsettling case involving an Irish terrorist, and a visit from an old flame of Hilda's.

This title is due for release on July 5, 2018
We'll send you an email as soon as it is available!