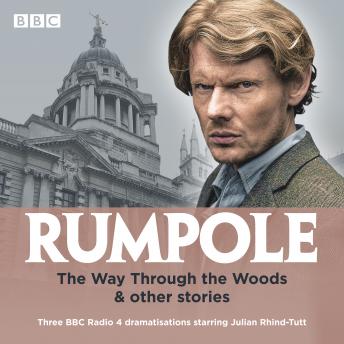 Rumpole: The Way Through the Woods & other stories: Three BBC Radio 4 dramatisations

Rumpole and the Way Through the Woods
Rumpole makes friends with a dog named Sir Lancelot, and finds himself defending a hunt saboteur who claims to be guilty of murder. But Horace is convinced that the true culprit is among the hunting fraternity.

Rumpole for the Prosecution
Rumpole’s personal commandment is ‘Thou Shalt Not Prosecute’ – but he breaks this rule to take on a private prosecution brought by a dead girl’s father. However, an obscure literary reference and a piece of evidence that doesn’t fit bring his defender’s instincts to the fore...

Rumpole and the Quacks
Temporarily indisposed, Rumpole consults a charming Indian doctor who later asks for Horace’s help when he is accused of molesting a patient. Meanwhile, Rumpole’s friendship with Phillida Erskine-Brown deepens as both their marriages hit a tricky patch.

Julian Rhind-Tutt stars as Rumpole, with Jasmine Hyde as Hilda, Nigel Anthony as Claude Erskine-Brown and Cathy Sara as Phillida.

Rumpole: The Way Through the Woods & other stories: Three BBC Radio 4 dramatisations