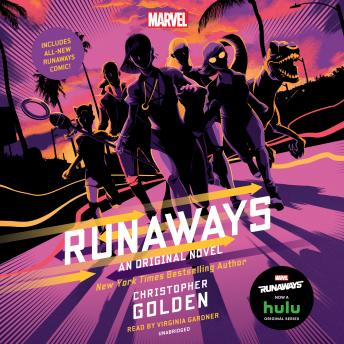 Written by New York Times best-selling author Christopher Golden, Runaways is a fresh take on the Marvel fan favorite. This audiobook includes a bonus PDF with the first issue of the revived Runaways comic series written by Rainbow Rowell with art by Kris Anka. It's easy for fans of the comics, fans of the new Hulu TV show, and first-timers to all enjoy this new take on an old classic.

'The Pride, back in L.A.? Their parents, alive? Karolina had never realized hope and fear could feel so much alike.'

Turns out murderous Super Villains don't make for good parents. The Runaways had no choice. They had to kill them. Well, more or less. Now Nico, Karolina, Gert, Chase, and Molly are on the run again, hiding out and trying to regain a sense of normalcy. But kids with super powers don't get to be normal.

The city is overrun with criminals, each faction bent on murdering them for one reason or another. It's only when the Runaways uncover the truth behind their parents' past that they realize the evil isn't just in L.A.