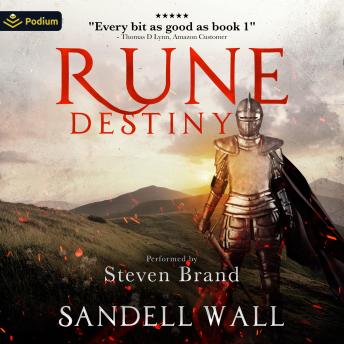 'The Alkomian Empire lies in ruin. An army of traitors marches on the capital, forcing the emperor from his throne. In his absence, chaos reigns. Villages burn as the blood of innocents runs in the streets. Entire provinces are reduced to rubble, demolished by terrible rune-power. Darkness and despair covers the land as hope for deliverance is consumed in the flames of destruction.


On the border of the empire, two young heroes stand bloodied but unbroken.


Aventine is cut off from the rest of the Rune Guard. Trapped in the Brokenspire Mountains, she fights to protect a small band of imperial loyalists from the corrupt soldiers of the First Legion.


Remus, shackles traded for an axe, leads his men against the runebound horde as it creeps across the Wilds. He is the last line of defense standing between the empire and this implacable foe.


As the empire crumbles, the architect of its doom rises in the east. Savaroth the Immortal walks the earth, and his coming heralds the end of the age of man.