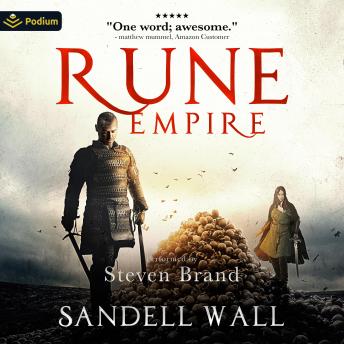 'Four hundred years ago the Alkomian Empire clawed its way from the long dark, uniting the splintered factions of mankind under one banner. Harnessing the mysterious power of runes, the empire of man spread across the land, exploring and inhabiting the ancient fortresses that they plundered for runestones. For centuries humanity has stood unopposed, masters of their own destiny.


In the east a darkness stirs. An evil beyond myth and memory sends its agents to plant the seeds of mankind's destruction. From the forgotten wastelands the vanguard of an invasion starts its slow but inexorable march.


On the border of the empire a novice blacksmith, disillusioned with his life, dreams of challenge and adventure.


In the imperial palace a young soldier embarks on her first mission as a member of the most elite fighting force in the empire.


As ruin descends upon the empire, two young heroes will be forged from blood and chaos.