Running After a Heartbreaker: Brides on the Run Book 4 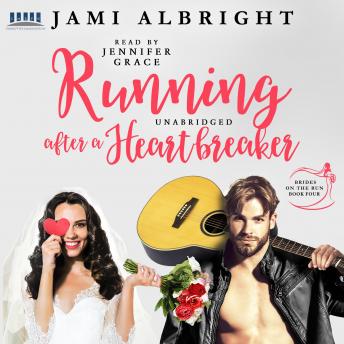 “The worst.” He placed his hands under her butt and lifted. “Should I stop?”

Hailey Odom’s life is out of tune. The bar she owns with her father is a Texas-sized money pit that she has four months to save. Her mean as a snake ex-husband is breaking their daughter’s heart daily. And the town of Zachsville hates her guts for something that was only fifty percent her fault.

And oh, right, she just ran out on her own wedding.

Beau Callen’s life is hitting all the right notes. Dubbed “The Heartbreaker” by his adoring female fans, he’s living the country music stardom dream. At least until an “altercation” lands half his band in jail and the other half in the hospital, this rising star could use a temporary place to crash.

The last thing Hailey or Beau needs is a scorching hot romance messing with their plans. So when Hailey rents Beau her backyard guesthouse and passions blaze hotter than the Texas sun, their dreams are in serious danger of going up in flames.

To make it all work, they’ll have to keep their hands off each other and their eyes on the prize. Too bad their hearts are singing a different tune.

Running After a Heartbreaker: Brides on the Run Book 4