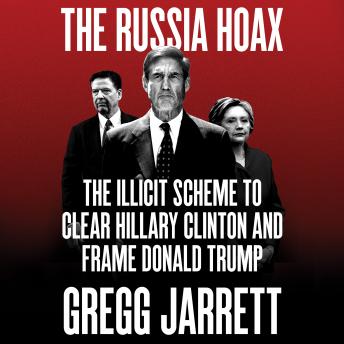 Fox News legal analyst Gregg Jarrett reveals the real story behind Hillary Clinton’s deep state collaborators in government and exposes their nefarious actions during and after the 2016 election.

The Russia Hoax reveals how persons within the FBI and Barack Obama’s Justice Department worked improperly to help elect Hillary Clinton and defeat Donald Trump in the 2016 presidential election.

When this suspected effort failed, those same people appear to have pursued a contrived investigation of President Trump in an attempt to undo the election results and remove him as president.

The evidence suggests that partisans within the FBI and the Department of Justice, driven by personal animus and a misplaced sense of political righteousness, surreptitiously acted to subvert electoral democracy in our country.

The book will examine:


- How did Hillary Clinton manage to escape prosecution despite compelling evidence she violated the law?
- Did Peter Strzok, James Comey, Andrew McCabe, Loretta Lynch, and others obstruct justice by protecting Clinton?
- Why was there never a legitimate criminal investigation of Clinton in the Uranium One case?
- Are the text messages exchanged between Strzok and FBI lawyer Lisa Page evidence of a concerted effort to undermine the electoral process?
- Was there ever any real evidence of 'collusion' between Trump and the Russians?
- Did Trump obstruct justice in the firing of Comey or was he legally exercising his constitutional authority?
- Did the FBI and DOJ improperly use a discredited 'dossier' about Trump to obtain a FISA warrant to spy on Trump associates?
- Should Mueller have disqualified himself under the special counsel law based on glaring conflicts of interest?
- Was fired National Security Adviser Michael Flynn unfairly charged with making a false statement?

With insightful analysis and a fact-filled narrative, The Russia Hoax delves deeply into Democrat wrongdoing.