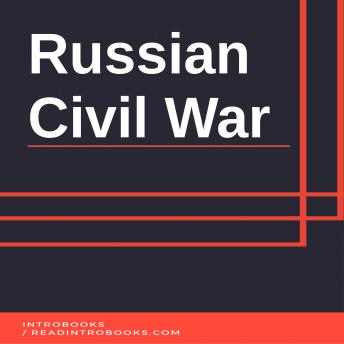 The Russian Civil War is regarded as one of the most important occurrences in the 20th century. There were not one but many reasons which sparked the Civil War in Russia. The event is at times clubbed together with the Great War. The number of people died in the Russian Civil War was so high that it shadowed the American Civil War. The end of Tsars saw different areas of Russia claiming for independence. Extremism and arrogance of some swept aside all humanity and raged on Russia and her people. There was situation of complete chaos in Russia. The Civil War was between the Red Army and the Whites. Although these two were the main parties who were in war with each other there were several others who were revolting and fighting against them. The Bolsheviks or the Red Army won the war while the Whites lost. World War I had left deep impacts on all the participating countries and Russia was not spared. The vitality and enthusiasm with which they entered the war had them suffer many fatalities. Irrespective of the many reasons why the Civil War happened the consequences led to a new government, new thoughts of society and economy. The Bolsheviks wanted to uproot all the social problems which were existing in the society because of the difference in class. They did succeed to some extent. Once Tsarist rule came to an end Communist movement took over which was frightening. The rule of the Communists did not last long but since its mere existence made it look like one of the important happenings in the twentieth century.

This title is due for release on May 25, 2019
We'll send you an email as soon as it is available!