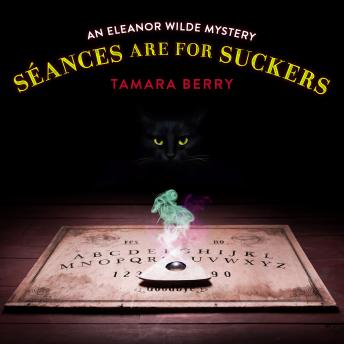 Séances Are for Suckers

Ellie has an ailing sister to care for, and working as a ghost hunter who doesn't believe in ghosts helps cover the bills for both of them. When she's lucky, it also pays for the occasional tropical vacation. Her brother doesn't exactly approve, but Ellie figures she's providing a service. On her latest job, though, she may be in for some genuine scares.

The skeptical, reserved, and very rich Nicholas Hartford III has flown her all the way to his family's ancestral estate in England-supposedly haunted by a phantom named Xavier. Nicholas thinks it's all just as much a crock as Ellie's business is, but the fact remains that something is causing the flashes of light, mysterious accidents, and other apparent pranks in the chilly, eerie castle. His mother is sure that Xavier is real, and he's willing to employ Ellie if she can get to the bottom of it and put a stop to the nonsense.

While the food and accommodations are somewhat disappointing (IKEA furniture? Really?), Ellie is finding it an adventure to get to know this eccentric family and their houseguests, and to poke around in the nearby village for clues. But when an actual dead body appears-and subsequently disappears-at Castle Hartford, she'll have to apply her talent for trickery and psychological insight to solve a flesh-and-blood murder.

Séances Are for Suckers