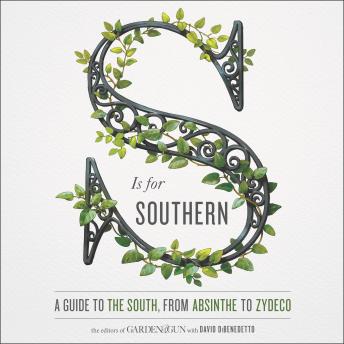 S Is for Southern: A Guide to the South, from Absinthe to Zydeco

Written By: Editors Of Garden And Gun, David Dibenedetto

The American South is a multifaceted region with its own vocabulary, peculiarities, and cultural touchstones. Even for those born in the South, the unspoken rules—layered in local nuances and complexities—can sometimes be confounding. Tennessee whiskey may technically be bourbon, but don't let anyone in Kentucky hear you call it that. And bless your heart, don’t you dare make the mistake of confusing a magnolia blossom with a Japanese tulip.

Now, from the editors of Garden & Gun—the magazine known as 'the soul of the South'—comes this encyclopedia of Southern living, culture, and history. Covering age-old traditions and current zeitgeists, S Is for Southern includes more than 500 entries spanning every letter of the alphabet, from absinthe to zydeco. This audiobook also includes 100 signature essays from notable Southern writers, including:

Informative and irreverent, S Is for Southern celebrates and demystifies the traditions of the South, and is a must-listen for all fans of the region and culture enthusiasts.

S Is for Southern: A Guide to the South, from Absinthe to Zydeco

by Editors Of Garden And Gun, David Dibenedetto