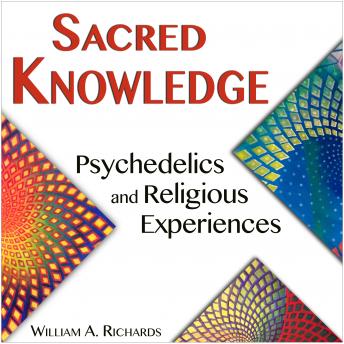 Written By: William A. Richards

"In the early 1960s, scientists openly advocated for experimentation with psychedelics. This effort, however, quickly turned into a discredited enterprise involving recreational drug use. But what if a study of psychedelics was undertaken with trusted scientific rigor?

William A. Richards does just that in Sacred Knowledge, the first well-documented, sophisticated account of the effect of psychedelics on biological processes, human consciousness, and revelatory religious experiences. Richards argues that, if used responsibly and legally, psychedelics have incredible potential to assuage human suffering and constructively contribute to the quality of life on our planet.

His work is based on nearly three decades of legal research with volunteers aged twenty-four to eighty-one. Sacred Knowledge enriches humanities and scientific scholarship, expanding work in philosophy, anthropology, theology, and religious studies, as well as in mental health, psychotherapy, and psychopharmacology.

Richards's analysis also contributes to social and political debates over the responsible integration of psychedelic substances into modern society. His book is an invaluable resource for readers who, whether spontaneously or with the facilitation of psychedelics, have encountered meaningful, inspiring, or even disturbing states of consciousness and seek clarity about their experiences.

Testing the limits of language and conceptual frameworks, Richards makes the most of experiential phenomena that stretch our concepts of reality and advances new frontiers in the study of belief, spiritual awakening, psychiatric treatment, and social well-being."

by William A. Richards