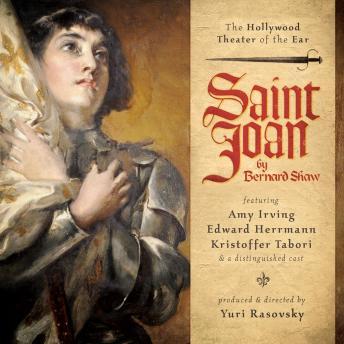 Saint Joan: A Chronicle Play in Six Scenes and an Epilogue

“Joan of Arc, a village girl from the Vosges, was born about 1412—burnt for heresy, witchcraft, and sorcery in 1431—rehabilitated after a fashion in 1456—designated Venerable in 1904—declared Blessed in 1908—and finally canonized in 1920. She is the most notable Warrior-Saint in the Christian calendar, and the queerest fish among the eccentric worthies of the Middle Ages.”—George Bernard Shaw

With Saint Joan, Shaw reached the height of his fame as a dramatist. Fascinated by the story of Joan of Arc but unhappy with “the whitewash which disfigures her beyond recognition,” he presents a realistic Joan at war not just with British invaders but with realpolitik. This is a masterpiece of the theater of ideas, presented in the most eloquent, vital, human, and moving terms. Blackstone commissioned this production from the award-winning Hollywood Theater of the Ear.

This title is due for release on January 28, 2010
We'll send you an email as soon as it is available!