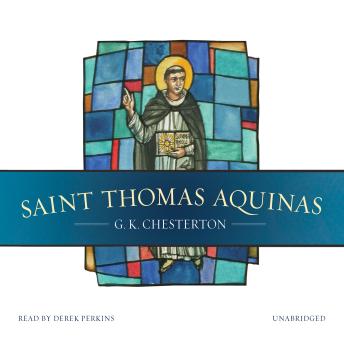 "You call him a Dumb Ox; I tell you that the Dumb Ox will bellow so loud that his bellowing will fill the world."-Albertus Magnus

Dubbed the "Dumb Ox" by his classmates for his shyness, Saint Thomas Aquinas proved to be possessed of the rarest brilliance, justifying the faith of his teacher, Albertus Magnus, and sparking a revolution in Christian thought. Chesterton's unsurpassed examination of Aquinas' thinking makes his philosophy accessible to listeners of any generation.

Étienne Gilson, the twentieth century's foremost authority on Aquinas, has said of this work, "I consider it as being without possible exception the best book ever written on Saint Thomas. Nothing short of genius can account for such an achievement."

"The best book ever written on Saint Thomas. Nothing short of genius can account for such an achievement."-Étienne Gilson, philosopher and historian