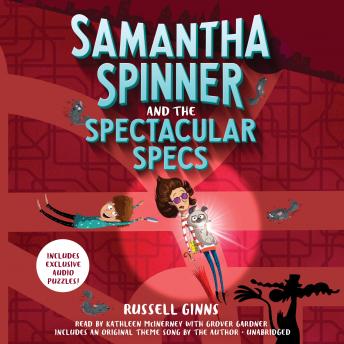 Samantha Spinner and the Spectacular Specs

Get ready for more round-the-world adventure with Samantha Spinner and her brother, Nipper, in the second book in this hilarious, puzzle-packed series filled with super-secret messages! Perfect for fans of Escape from Mr. Lemoncello's Library and classics like Holes.

When Samantha Spinner's uncle Paul disappeared, he left presents for his nieces and nephew. Samantha's sister, Buffy, got $2,400,000,000. Her brother, Nipper, got the New York Yankees. Samantha got . . . a rusty old umbrella.

Well, it seemed unfair--until Samantha discovered that the old umbrella holds the plans for a super-secret network of transit systems that covers the globe. It's the ticket to danger and adventure beyond anyone's wildest dreams.

But Uncle Paul is still missing. And Samantha just received a new gift from him: a pair of strange purple sunglasses. Are they another powerful present? A clue to his whereabouts? Or just a bad fashion choice? Samantha and Nipper need to figure it out fast, because . . . here comes the SUN!

'A winning mix of fast-paced action, fascinating facts, bathroom humor, and hidden puzzles . . . [that is] sure to please action-loving middle-grade readers.' --Kirkus Reviews

'Full of adventure and survival . . . [and with] characters [who] are likable, realistic, and well rounded . . . [Samantha Spinner and the Super-Secret Plans is] great for [readers of] series like The 39 Clues.' --School Library Journal

Samantha Spinner and the Spectacular Specs