San Francisco is Burning: The Untold Story of the 1906 Earthquake and Fires 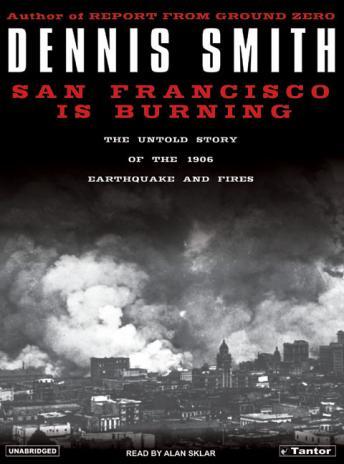 At 5:12 a.m. on the morning of April 18, 1906, San Francisco was struck by one of the worst earthquakes in history, instantly killing hundreds. The ensuing fires that ravaged the city for days were responsible for the deaths of as many as 3,000 more. In all, 522 blocks and 28,188 buildings were leveled, and some 200,000 people dislocated.

This watershed event in American history has never before been told with the richness of historical detail and insight that our foremost historian of fire, Dennis Smith, brings to it in San Francisco Is Burning. Smith cinematically recounts this terrible tragedy through the stories of the people who lived through those terrible days-from a valiant naval officer who helped save the city's piers and wharves to Eugene Schmitz, the crooked mayor, to the 'debonair scoundrel' Abe Ruef, the most erudite city boss in American history. Throughout, Smith reveals many unknown details about the event, from the city's great vulnerability to fire-due to its corrupt and hasty building practices-to the widespread racism the quake unleashed and the atrocities committed by national guardsmen. Told with verve and a seasoned firefighter's knowledge, San Francisco Is Burning is the gripping and definitive account of one of the greatest disasters of the twentieth century.

San Francisco is Burning: The Untold Story of the 1906 Earthquake and Fires

This title is due for release on September 22, 2005
We'll send you an email as soon as it is available!