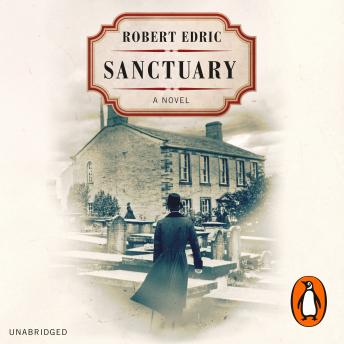 Branwell Brontë - unexhibited artist, unacknowledged writer, sacked railwayman, disgraced tutor and spurned lover -finds himself unhappily back in Haworth Parsonage, to face the crushing disappointment of his father and his three sisters, whose own pseudonymous successes - allegedly kept secret from him – are only just becoming apparent.

With his health failing rapidly, his literary aspirations abandoned and his once loyal circle of friends shrinking fast, Branwell lives in a world of secrets, conspiracies and seemingly endless betrayals. To restore himself to a creative and fulfilling existence in the face of an increasingly claustrophobic environment, he returns to the drugs, alcohol and the morbid self-delusion which have already played such a large part in his unhappy life.

Sanctuary is a lacerating and moving portrait of self-destruction. In it, Robert Edric has reimagined the final months of one of the great bystanders of literary history, and, in so doing, has shone a penetrating light on one of the most celebrated and perennially fascinating families in our creative history.