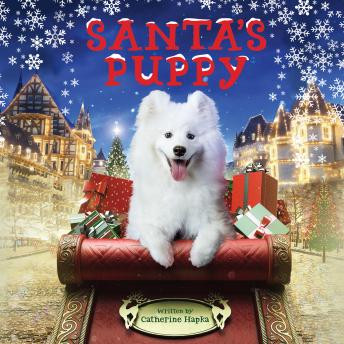 For 364 days of the year, Santa and his best friend, Peppermint Bark, are inseparable. Santa's fluffy white dog helps herd the reindeer, keep tabs on the elves, and check the list—twice. But even though Peppermint Bark asks every Christmas, he never gets to join Santa on his sleigh ride around the world…until he decides to stow away... When eight- and eleven-year-old Chris and Holly Kerstman discover a small white dog wedged in their chimney on Christmas morning, they can't imagine where he came from—until he tells them. Peppermint Bark is unlike any dog they and Holly's best friend, Ivy, have ever met: His breath smells of mint, faint jingle bells can be heard when he wags his tail, and he can talk! He tells the kids all about his secret sleigh ride and how he got accidentally left behind on their rooftop, but when it comes to answering the question of how he'll get home to the North Pole, Peppermint Bark is stumped. Now, it's up to the kids to work together to get Peppermint Bark home before the last magical portal to the North Pole closes at midnight on Christmas Day.