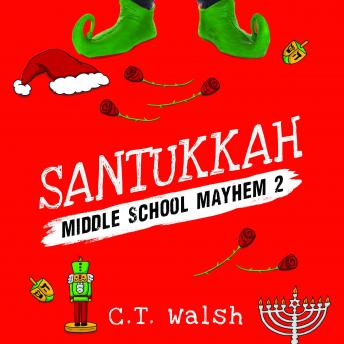 Austin Davenport is back! With new characters and a new villain; the only guarantee is more mayhem! Middle School Mayhem: Santukkah! is the second installment of this planned twelve-book series. This fast-paced and gut-busting series is designed for middle grade and younger YA readers.

After his brother wins a big sports award, Austin is jealous and wants his time to shine in the spotlight. With the school holiday musical just around the corner, Austin wonders if he's good enough for the lead role, but also scared he might fart during a solo. Amplifying the problem is a new kid in town: the golden-voiced, dark-hearted Randy Warblemacher, who will stop at nothing to destroy Austin's chances at fame and fortune, while attempting to steal his girlfriend in the process.

Oh, and following the chaos from the Halloween Dance, Cherry Avenue's overbearing principal is gunning even harder than before to get Austin expelled.

Will Austin win the lead and steal the show? Will he gain his parents' affection even though he doesn't have the family butt chin? Can he juggle all of the mayhem that middle school throws at him or will his klutzery destroy all that he holds dear?

What are you waiting for? I'm not going to answer the questions for you. You have to listen to the story! I mean, seriously…