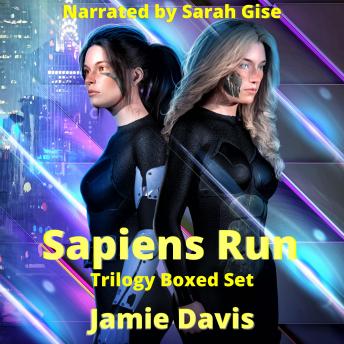 She was raised to fear them. But now she's become her own worst enemy...
Save 40% off individual book prices.
America, 2055. Cass is equal parts excited and nervous to leave her hometown. Stepping away from her technologically-conservative family for the first time, she sets off for college with dreams of saving humanity. But as the Sapien falls for her cybernetically-enhanced roommate, her deeply programmed beliefs begin to glitch...
Confused in a world that no longer makes sense, Cass barely registers the horrific accident that leaves her near death. When she wakes up, she discovers the same technology she's always hated is the only thing keeping her alive. No longer purely human, Cass questions everything she thought she knew about good and evil.
As tensions between man and machine head for a meltdown, Cass must choose a side before the conflict turns deadly...
This Sapiens Run Trilogy Boxed Set is the cyberpunk dystopian thriller trilogy you've been waiting for. If you like strong female characters, dystopian futures, and exploring what it means to be human, then you'll love Jamie Davis's thought-provoking series.
Buy Sapiens Run Trilogy Boxed Set to reboot prejudice today!

This title is due for release on December 25, 2019
We'll send you an email as soon as it is available!