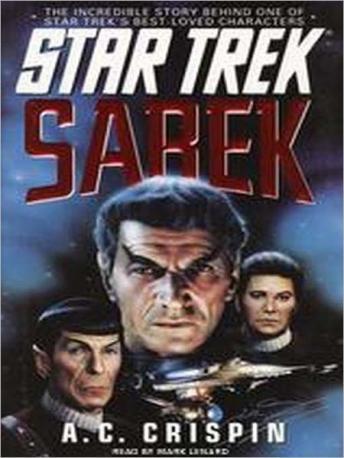 The novel begins after the events of Star Trek VI: The Undiscovered Country™. Spock's mother, Amanda Grayson, is dying, and Spock returns to the planet Vulcan where he and Sarek enjoy a rare moment of rapprochement. But just as his wife's illness grows worse, duty calls Sarek away -- once again sowing seeds of conflict between father and son. Yet soon, Sarek and Spock must put aside their differences and work together to foil a far-reaching plot to destroy the Federation -- a plot that Sarek has seen in the making for nearly his entire career.
The epic story will take the crew of the U.S.S. Enterprise™ to the heart of the Klingon Empire, where Captain Kirk's last surviving relative has become a pawn in a battle to divide the Federation...and conquer it. With Sarek's help, the crew of the Starship Enterprise™ learns that all is not as it seems. Before they can prevent the Federation's destruction, they must see the face of their hidden enemy -- an enemy more insidious and more dangerous than any they have faced before...