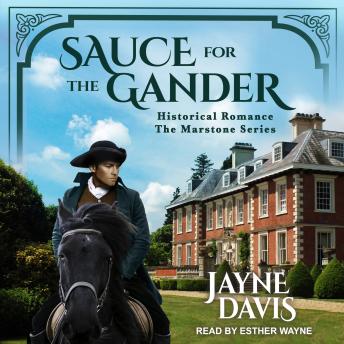 Sauce for the Gander: Historical Romance

A duel. An ultimatum. An arranged marriage.

Will, Viscount Wingrave, whiles away his time gambling and bedding married women, thwarted in his wish to serve his country by his controlling father.

News that his errant son has fought a duel with a jealous husband is the last straw for the Earl of Marstone. He decrees that Will must marry. The earl's eye lights upon Connie Charters, unpaid housekeeper and drudge for a poor but socially ambitious father who cares only for the advantage her marriage could bring him.

Will and Connie meet for the first time at the altar. But Connie wants a husband who will love and respect her, not a womanizer and a gambler.

Their new home, on the wild coast of Devonshire, conceals dangerous secrets that threaten them and the nation. Can Will and Connie overcome the forces against them and forge a happy life together?

It's a great listen and a wonderful Narrator.

Disappointing. The plot idea is good but very poor execution.