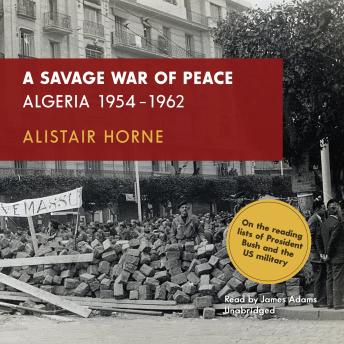 The Algerian War lasted from 1954 to 1962. It brought down six French governments, led to the collapse of the Fourth Republic, returned de Gaulle to power, and came close to provoking a civil war on French soil. More than a million Muslim Algerians died in the conflict, and as many European settlers were driven into exile. Above all, the war was marked by an unholy marriage of revolutionary terror and repressive torture. Nearly half a century has passed since this savagely fought war ended in Algeria’s independence, and yet its repercussions continue to be felt not only in Algeria and France but throughout the world. Indeed, from today’s vantage point the Algerian War looks like a full-dress rehearsal for the sort of amorphous struggle that convulsed the Balkans in the 1990s and that now ravages the Middle East, from Beirut to Baghdad—struggles in which questions of religion, nationalism, imperialism, and terrorism take on a new and increasingly lethal intensity. A Savage War of Peace is the definitive history of the Algerian War, a book that brings that terrible and complicated struggle to life with intelligence, assurance, and unflagging momentum. It is essential reading for our own violent times as well as a lasting monument to the historian’s art.

This title is due for release on January 25, 2008
We'll send you an email as soon as it is available!