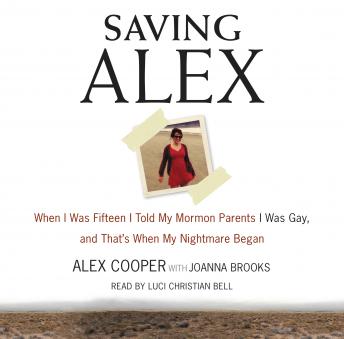 Saving Alex: When I was Fifteen I Told My Mormon Parents I Was Gay, and That's When My Nightmare Began

Days after Alex Cooper told her parents that she was gay, they drove Alex from their home in Southern California to Utah, where they signed over guardianship to fellow Mormons who promised to save Alex from her homosexuality.

For eight harrowing months, Alex was held captive in an unlicensed “residential treatment program,” modeled on the many “therapeutic” boot camps scattered across Utah. Alex was physically and verbally abused, and forced to stand facing a wall for up to eighteen hours a day wearing a heavy backpack full of rocks. “God’s plan does not apply to gay people,” her captors told her, using faith to punish and terrorize her. With the help of a dedicated legal team in Salt Lake City, Alex would eventually escape and make legal history in Utah by winning the right to live under the law’s protection as an openly gay teenager.

Saving Alex is a horrific yet uplifting story of identity, faith, courage, acceptance, and freedom that reveals what happens when religion goes too far and how a group of dedicated Americans and one young woman fought for her rights, including finding the strength and courage to be herself, and how her story has inspired countless others along the way.

Saving Alex: When I was Fifteen I Told My Mormon Parents I Was Gay, and That's When My Nightmare Began