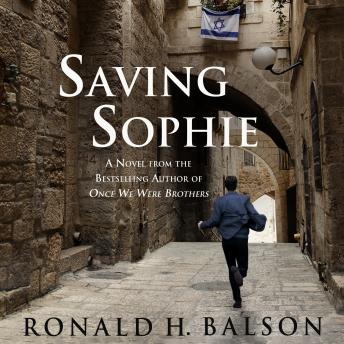 #2 of Liam Taggart and Catherine Lockhart

From Ronald H. Balson, author of Once We Were Brothers, Saving Sophie is the powerful story of the lengths a father will go through to protect his daughter and an action-packed thriller that will take you on an unforgettable journey of murder and deception, testing the bonds of family and love.

Jack Sommers was just an ordinary accountant from Chicago-that is, until his wife passed away, his young daughter was kidnapped, and he became the main suspect in an $88 million dollar embezzlement case. Now Jack is on the run, hoping to avoid the feds long enough to rescue his daughter, Sophie, from her maternal grandfather, a suspected terrorist in Palestine.

With the help of investigative team Liam and Catherine, and a new CIA operative, a secret mission is launched to not only rescue Sophie but also to thwart a major terrorist attack in Hebron. But will being caught in the crossfires of the Palestine-Israeli conflict keep their team from accomplishing the task at hand, or can they overcome the odds and save countless lives, including their own?

I loved this book. I was pleasantly surprised, when I found out that all the main characters were from "Once We Were Brothers" which I enjoyed very much.

The book was well written and had a good plot. However, I was not as drawn in as I would have hoped with the characters, and the history on the Middle East was to me, too long and detailed. The narrator was amazing.

Really enjoyed this book. Love this series. The narrator is FANTASTIC!

A riveting book full of twists and turns in a contemporary Middle East setting. It was a srprise and delight to meet the 2 main figures from previous of the authors books again. I really enjoyed it and loved the pace too.

Another riveting book by Bolden. You cannot stop listening which I believe sometimes is better than reading. The reader is excellent! Without giving anything away, just listen.