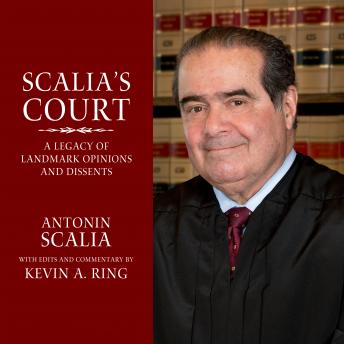 Scalia's Court: A Legacy of Landmark Opinions and Dissents

The sudden passing of Justice Antonin Scalia shook America. After almost thirty years on the Supreme Court, Scalia had become as integral to the institution as the hallowed room in which he sat. His wisecracking interruptions during oral arguments, his unmatched legal wisdom, his unwavering dedication to the Constitution, and his blistering dissents defined his leadership role on the court and inspired new generations of policymakers and legal minds.
Now, as Republicans and Democrats wage war over Scalia's lamentably empty Supreme Court seat, Kevin A. Ring, former counsel to the U.S. Senate's Constitution Subcommittee, has taken a close look at the cases that best illustrate Scalia's character, philosophy, and legacy. In Scalia's Court, Ring collects Scalia's most memorable opinions on free speech, separation of powers, race, religious freedom, the rights of the accused, abortion, and more; and intersperses Scalia's own words with an analysis of his legal reasoning and his lasting impact on American jurisprudence.

This title is due for release on April 22, 2016
We'll send you an email as soon as it is available!