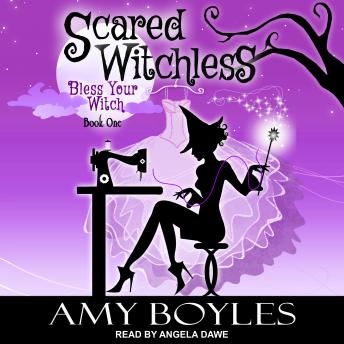 #1 of Bless Your Witch

Dylan Apel is having one heck of a summer. She knows her hand-made clothing is special, but magical? Discovering that she's a witch is bad enough, but when Dylan realizes there are folks who'll kill to possess her witchy powers- that's enough to make a girl want to hide out in the back of her boutique. The only problem is, Queen Witch is in town, itchin' to make sure Dylan learns to cast spells, and this witch won't take no for an answer.

Dylan must learn fast-someone just killed her best client with a poisoned gown meant for Dylan. Was it the tall, mysterious hottie in black, who's suddenly everywhere she goes? After all, the first thing Roman Bane says is he doesn't like witches. Is he here to save her, or kill her?

Dylan is barely getting a handle on her new powers when she finds herself surrounded by witches bossing her this way and that, local police nosing about, and wary clients-death by clothing is not good for business. And the solstice is coming . . . a time when witch powers are at their peak. Can Dylan survive the chaos long enough to figure out her new life?

So funny the narrator made the story so much fun. Loved it. Highly recommend it for a bit to serious read

I liked it. Funny and imaginative and the narrator fit perfectly.

This is a goofy series, but the narrator really is outstanding. Excellent voices, accents, and energy is brought to her performance.

Quite funny, I actually lol"d in a few places. I found the story got weaker as the book went on. Enjoyable enough but dont know if I'd read the rest of the series.

I love this story especially the way the narrator tells it