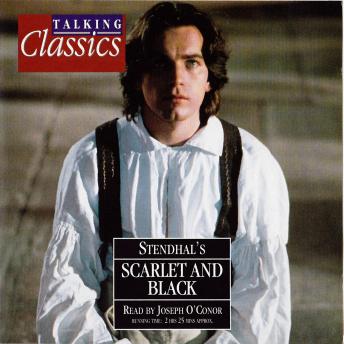 Contemptuous of life as a carpenter's son in his native town of Verrieres, Julien Sorel dreams of a fame as great as Napoleon's. To this end he assumes many guises - celibate priest, self-effacing secretary and keen Royalist. He also impresses two very different women, Madame de Renal and Mathilde de la Mole, with disastrous consequences. Throughout the drama, Stendahl ironically records Julien's absurd moral code and the corruptness of the world he strives to conquer. No matter how charming the rest of this tragicomedy; the final act is bloody.
1. THE YOUNG TUTOR. Monsieur de Renal, the mayor Of Verrieres, decides his children need a tutor, and chooses Julien Sorel, a carpenter's son, who is training to be a priest. On their first meeting, Madame de Renal begs Julien to treat her children kindly and he is struck be her beauty. Elisa, a maid in the household, falls in love with Julien and wants to marry him, but Julien tells Father Chelan, his mentor, that the proposal is unacceptable. He then goes with the family to their chateau in the country where, alone with Madame de Renal, he clasps her hand.

2. HEROIC SEDUCATION. Julien rejects a partnership offer from his friend Fouque, a timber merchant, because it would slow down his chance of social advancement as a solider or priest. He hedges his bets, however, when he finds that Father Chelan has lost his living. At the chateau, Julien tells Madame de Renal that he will visit her at night and, summoning his courage, he goes to her room. She is enraged, then passionate, but the next day she is coy. Julien falls in love with her, but Elisa suspects them and tells Monsieur Valenod, de Renal's rival. Valenod sends de Renal an anonymous letter informing him of his wife's infidelity.

3. END OF THE AFFAIR. To protect herself and implicate Valenod, Madame de Renal tells Julien to fabricate another anonymous letter which she gives to her jealous husband. When he reads this, she demands Julien's dismissal, thus saving a scandal. She implies that Elisa has had affair with Valenod and that he is a philanderer. She further mentions letters from Valenod to herself, which incenses her husband all the more. Julien then leaves for the seminary at Besancon. There, in a cafe, he takes a fancy to a barmaid and obtains her address on a card while asking her to store his plain clothes. He then meets Father Pirard, master of the seminary.

4. ODDS PRIEST OUT. When Father Pirard learns of Julien's interest in the barmaid, he interrogates him. Later, Pirard is satisfied with Julien's explanation about the clothes and makes amends by allowing him to decorate the cathedral for the feast of Corpus Christi. There, Madame de Renal sees Julien and faints. Pirard departs for Paris where he declines a secretaryship offer to him by the Marquis de la Mole; he suggests Julien instead. Julien leaves for Paris via the chateau where, alone with Madame de Renal, he is disturbed by her husband and flees.

5. AMONG THE ARISTOCRATS. Julien is nervous and amid the splendours of Paris, but finds the Marquis civil and impresses him with his efficiency. He also wins the Marquis' affection and is given a blue suit to wear in the evenings, when he is treated as an equal. Julien excels himself while on a diplomatic mission to London, but is disdainful at a ball which Mathilda de la Mole, daughter of the Marquis, forces him to attend. She is bored by the mindless aristocrats, but finds Julien fascinating.

6. MAD LOVE. Julien is to leave the de la Mole residence to look after the family's affairs in the Languedoc. Mathilda declares her love for Julien. He is flattered and tells the Marquis that he cannot leave. Mathilda then tells Julien to climb to her bedroom at midnight. Alarmed, he writes to Fouque explaining all, but still attends his rendezvous. Julien is embarrassed and she wavering, but she gives herself to him. Later, in the library, Mathilda rages at having made love to the first man to come along. In anger Julien draws an old sword and threatens her. She is impressed and Julien decides to play cool.

7. MARRIAGE GAMES. Mathilda falls in love with Julien and soon discovers that she is pregnant. Her father is furious. He insults Julien who, as a gesture, offers to kill himself and then rides of to confession to Father Pirard. Julien returns to Paris, where the Marquis begins to see reason. Julien lies low until the Marquis makes over some estates and arranges a commission and title for Julien to facilitate a marriage. Julien is on the point of being admitted to his regiment when the Marquis receives a letter from Madame de Renal accusing Julien of being a cold-blooded seducer. Julien sets of to Verrieres where he shoots her in revenge.

8. A HERO'S DEATH. Julien is imprisoned. Fouque offers his help and tells him that Madame de Renal is alive. Mathilda later visits Julien in disguise. The couple embrace passionately, but Julien still insists on pleading guilty to premeditated murder. Madame de Renal writes to the jurors begging for their mercy but, led by Valenod, they find Julien guilty. He is sentenced to death and refuses appeal out of a misguided sense of bravery. Madame de Renal visits Julien in prison, but she is ordered home by her husband. After Julien's execution, Mathilda arranges a magnificent funeral. Three days later, Madame de Renal dies.