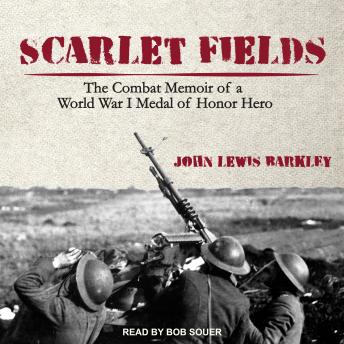 Scarlet Fields: The Combat Memoir of a World War I Medal of Honor Hero

A reconnaissance man and sniper, John Lewis Barkley served in Company K of the 4th Infantry Regiment, a unit that participated in almost every major American battle. The York-like episode that earned Barkley his Congressional Medal of Honor occurred on October 7, 1918, when he climbed into an abandoned French tank and singlehandedly held off an advancing German force, killing hundreds of enemy soldiers. But Barkley's memoir abounds with other memorable moments and vignettes, all in the words of a soldier who witnessed war's dangers and degradations but was not at all fazed by them.

Unlike other writers identified with the 'Lost Generation,' he relished combat and made no apology for having dispatched scores of enemy soldiers; yet he was as much an innocent abroad as a killing machine, as witnessed by second thoughts over his sniper's role, or by his determination to protect a youthful German prisoner from American soldiers eager for retribution. This Missouri backwoodsman and sharpshooter was also a bit of a troublemaker who smuggled liquor into camp, avoided promotions like the plague, and had a soft heart for mademoiselles and fräuleins alike.

Scarlet Fields: The Combat Memoir of a World War I Medal of Honor Hero