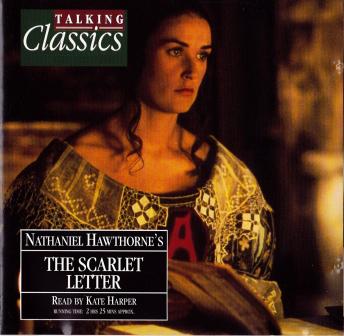 Nathaniel Hawthorne's novel The Scarlet Letter is a dramatic story. The plot progresses through a series of theatrical set pieces, such as the three incidents on the scaffold, Hester Prynne's confrontation with the Governor and her liaison with Mr Dimmesdale in the forest glade. The author's vivid, descriptive writing creates strong images of his protagonists in the minds of his readers, and this powerful visual impact heightens the sense of conflict within, and between the characters.
1. ADULTERY PUNISHED. An American puritan community gather around the town prison waiting for Hester Prynne to be led out. She is wearing a scarlet letter `A' on her dress, to symbolize her adultery. Hester recognizes an elderly man in the crowd who, although a stranger to the town, is in reality Hester's learned English husband. He sent her ahead of him to Massachusetts, and in his absence she has borne a child by another man. As Hester stands on a scaffold, two clergymen, John Wilson and Arthur Dimmesdale, ask her to name the baby's father, but she refuses.

2. SECRETS ARE KEPT. After her public ordeal, Hester is in a state of nervous excitement and physician, Royer Chillingworth, who is deformed, is brought to her. He is, in fact, Hester's husband, and he gives her medicine which she fears is poison. He declares that he could desire no greater vengeance on her than the public humiliation of the scarlet letter she wears. Chillingworth declare that he means to find out who her lover is. He then makes her swear that she will keep his identity a secret from the community. Hester moves to a cottage on the outskirts of town, for she will not flee, considering that her fate lies in the place of her sin and close to her partner in crime. Her daughter, Pearl, a wilful, difficult child, lives with her.

3. FIGHT FOR JUSTICE. Hester insists on meeting Mr Bellingham, the town Governor, even though he is in a conference with three pillars of the community. She demands that the men give up their plans to take Pearl away from her. Reverend Wilson asks Pearl a few religious questions to test how devout her upbringing is, but perversely she gives a playful answer. In desperation, Hester asks Dimmesdale to speak on her behalf. He argues that the bond between mother and child is sacred and that Pearl is Hester's blessing and retribution.

4. A DREAFUL DISCOVERY. Dimmesdale's health begins to fail and Chillingworth determines to find the cause. The old man arranges to lodge with the afflicted clergymen in order to study his young host. He tells Dimmesdale that the minister's bodily illness is due to a spiritual sickness and Dimmesdale replies that he will turn to God for healing. Soon after, Chillingworth creeps up on Dimmesdale as he sleeps and undoes his shirt. What he sees brings him joy, for he now knows how best to torture his victim. Meanwhile, Dimmesdale suffers agonies of guilt.

5. NIGHT OF MADNESS. Late one evening, desperate for peace, Dimmesdale stands on the scaffold where Hester once stood. He is soon discovered by Hester and Pearl and he bids them join him. Pearl asks if he will repeat this act in daylight but he refuses. He then sees a red letter 'A' glowing in the sky. Chillingworth witnesses the whole scene. Hester, strengthened by her continuing ordeal and shocked by Dimmesdale's decline, tells her husband that she will reveal his identity. She understands what a fiend Chillingworth has become.

6. GUILTY SECRETS. Hester surprises Dimmesdale as he walks in the forest and he admits that he suffers from secret guilt. She then reveals that Chillingworth is her husband and demands that Dimmesdale forgive her for her deception. She promises to run away with him and urges him to leave the community and start anew in another country. She casts off her scarlet letter and lets down her hair, then calls Pearl to openly greet her father. However, the child will not come to her until she puts on her scarlet letter again. Dimmesdale greets Pearl with a kiss, but she rejects him.

7. PLANS TO FLEE. The couple plan to sail for Bristol and Hester secretly arranges for their passage. Dimmesdale is pleased that this will be after he has preached his sermon to mark the election of the new Governor, the pinnacle of his career. He is revitalized and filled with wicked humour, and informs Chillingworth that he no longer has need of his potions. Hester is horrified to learn that Chillingworth is also booked on their ship.

8. A GRAND REVELATION. Dimmesdale preaches an inspired sermon. As the Governor's procession crosses the square, Dimmesdale holds out his arms to Hester and Pearl. The three mount the scaffold together and Chillingworth follows, telling Dimmesdale that there is no way to escape from him. Knowing that he is a dying man, Dimmesdale confesses his sin to the community and bare his breast to reveal a scarlet letter 'A'. Hester assures him of her love, but he tells her to think only of their sin as he dies in her arms. There is much debate among the townspeople as to the nature of Dimmesdale's death, some still denying that he had any connection with Hester. Chillingworth, deprived of his victim, withers and dies, leaving his money to Pearl, Hester takes Pearl to England, but later, an old lady, she returns to Boston to live out her days wearing her scarlet letter.