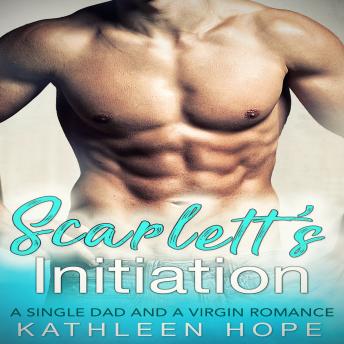 Scarlett’s Initiation: A Single Dad and A Virgin Romance

Michael closed his eyes and took a deep breath, reminding himself for the umpteenth time this was no big deal. He’d stood in the middle of heated boardrooms and barked out orders. He had stared down presidents of multi-billion-dollar corporations. Certainly, he could do this. At least, he was fairly certain he could do this.

He’d been a bachelor, living on his own his entire life. Give him a twenty-four year old girl, and he could tell you—or gladly show you—exactly what to do with one of them. But a four-year-old? They’re all tutus and princesses, and everything else he had absolutely no idea what to do with.

And yet, in less than five minutes, he was going to be a father. Well, apparently he’d been one for about four years now, but since he’d had no idea he had a child until two days ago, he was wading into uncharted territory here.

The car slowed and he glanced down at the documents in his hand one last time, the documents detailing the guardianship will of Lisa Blake, a woman he hadn’t seen in years—about five years, actually. In all that time, she hadn’t once thought to tell him he had a daughter? Now, he was suddenly supposed to swoop in and take over where she’d left off? What the hell did he know about raising a child?—about as much as he knew about tutus and princesses.

Still, he was a quick learner. How difficult could it be? In the past forty-eight hours, he had managed to transform his house into a child-friendly environment, turn one of the guest bedrooms into every little girl’s dream room—at least according to the decorator—and purchase every single toy in the Young Learner’s catalogue. What more could a little girl want?

His driver opened the car door and he stepped out in front of an upscale, two-storey house. This was it. He strode headlong for the front door, not the kind of guy to hesitate when there was a job to be done. The door opened before he reached the top step of the porch and he nodded to the middle-aged man there with spectacles and a receding hairline.

“Good morning, Mr. Chase,” the man greeted in a deep voice that contrasted sharply with his short, skinny frame.

He nodded and shook the hand the man extended. In truth, he couldn’t remember the lawyer’s name...

Scarlett’s Initiation: A Single Dad and A Virgin Romance