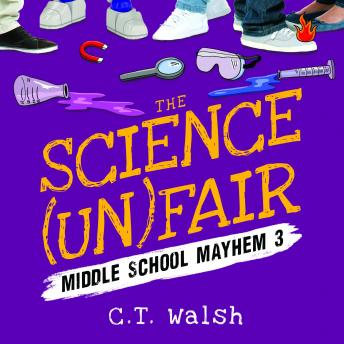 Thanks for tuning your station to Nerd Nation! Austin Davenport returns in Middle School Mayhem: Science (Un)Fair, the third installment of a planned twelve-book series. And this time, he's playing for keeps. Whatever that means.

But seriously though, the stakes have never been higher for Austin, whose principal is salivating at the chance to get him expelled. A new website that bashes the overbearing principal surfaces and after no investigation whatsoever, Austin is the one and only suspect. To make matters worse, Randy Warblemacher, notorious cheater and Austin's chief nemesis, offers Austin a wager on the outcome of the science fair and it's an offer too good to refuse, but after a communication mix-up, the lovable underdog finds himself going head to head with his own girlfriend.

Will the competition be too much for their relationship? Will Austin's design for a fart-suppression device save the environment and the institution of marriage by reducing toxic fume emissions by 40%? Or will his human catapult design transform long-distance travel, rendering the airline industry obsolete?

Will Austin be expelled for a crime he didn't commit? Can Austin beat Randy? Will Randy play fair (I know, dumb question.) What will Austin do when the love of his life, Sophie Rodriguez, gets caught up in a cheating scandal?

The funny and fast-paced nature of this series is meant for middle grade and early young adult listeners.

This title is due for release on December 16, 2019
We'll send you an email as soon as it is available!