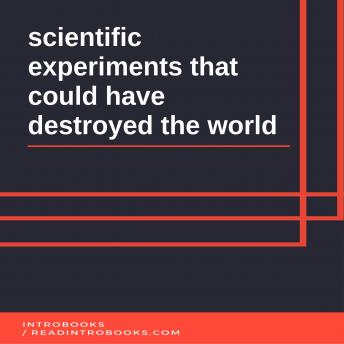 Scientific Experiments That Could Have Destroyed the World

Science informs the public policies, the social, and the personal decisions to conserve energy, farming, leisure, health, transport, defense, and so forth. Whether there are fair chances for failure or not, conducting experiments on merits basis, is usual amidst the world wide scientists today. If there are ample negatives then it is good to forsake the study or the research for the sake of the safety, all until the person come up with something really solid and substantial. At the same time, the understanding and the knowledge of the commons opposed to that of the scientists, is way different. That is the reason why they are scientists.
Having said that, to counter, or to argue with the top scientists, and their theories is not well within the scope of the insane commons. That boosts the confidence of the researchers to do what they want to do, and they get approval ahead to do the needful. It is generally acceptable saying that anything that is new is sure to get agitations from all the sides. Even the train, or radio or television or a steamer had agitations. Now, life is inevitable without using the Smartphone, high end gadgets, metro rails and so forth. In that aspect, encouraging the experiments that are conducted safely is the only choice for betterment. Thank much to all those who helped in the making of this useful literature.

Scientific Experiments That Could Have Destroyed the World

This title is due for release on May 28, 2016
We'll send you an email as soon as it is available!