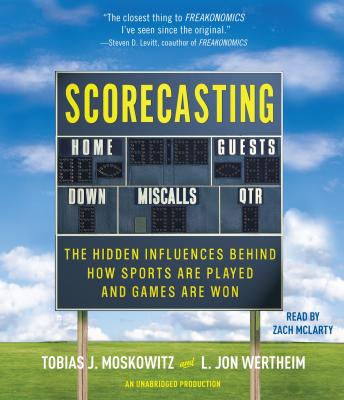 Scorecasting: The Hidden Influences Behind How Sports Are Played and Games Are Won

In Scorecasting, University of Chicago behavioral economist Tobias Moskowitz teams up with veteran Sports Illustrated writer L. Jon Wertheim to overturn some of the most cherished truisms of sports, and reveal the hidden forces that shape how basketball, baseball, football, and hockey games are played, won and lost.

Drawing from Moskowitz's original research, as well as studies from fellow economists such as bestselling author Richard Thaler, the authors look at: the influence home-field advantage has on the outcomes of games in all sports and why it exists; the surprising truth about the universally accepted axiom that defense wins championships;  the subtle biases that umpires exhibit in calling balls and strikes in key situations; the unintended consequences of referees' tendencies in every sport to 'swallow the whistle,' and more.

Among the insights that Scorecasting reveals:

• Why Tiger Woods is prone to the same mistake in high-pressure putting situations that you and I are
• Why professional teams routinely overvalue draft picks
• The myth of momentum  or the 'hot hand' in sports, and why so many fans, coaches, and broadcasters fervently subscribe to it
• Why NFL coaches rarely go for a first down on fourth-down situations--even when their reluctance to do so reduces their chances of winning.

In an engaging narrative that takes us from the putting greens of Augusta to the grid iron of a small parochial high school in Arkansas, Scorecasting will forever change how you view the game, whatever your favorite sport might be.

Scorecasting: The Hidden Influences Behind How Sports Are Played and Games Are Won