Scorpion Down: Sunk by the Soviets, Buried by the Pentagon: The Untold Story of the USS Scorpion 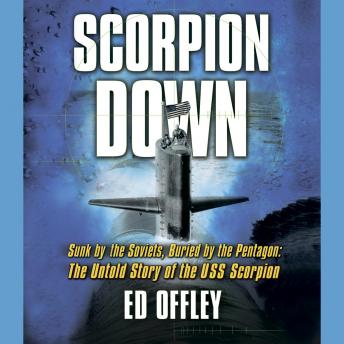 The Hunt for Red October meets Blind Man's Bluff in the untold story of an American submarine torpedoed at the height of the Cold War-and the forty-year cover-up that followed.

The last thing they heard was the faint scree-scree of a high-speed propeller. Then the torpedo hit, the warhead detonated, the ocean thundered in, and ninety-nine men died. On May 22, 1968, an American submarine was sunk by the Soviets as reprisal for the sinking of a Soviet sub just ten weeks before. The tragic loss of the USS Scorpion and its crew is still described by the U.S. Navy as an 'inexplicable accident.' In fact, it was a secret buried by both the U.S. and the Soviet governments to prevent the Cold War from turning into World War III.

For nearly forty years, researchers, journalists, and family members of the lost crew have tried to learn the truth while the Navy and U.S. intelligence communities have covered up the facts. Based on a quarter-century of research, an extraordinary array of new resources, and hundreds of interviews with military personnel with direct connections to the disaster, Scorpion Down is the first book to tell what really happened. It's the first to reveal that the official Scorpion story-the sub's failure to make port, the frantic open-ocean hunt, the search that ultimately 'found' the wreckage, and the Court of Inquiry's carefully crafted conclusions-was all a lie.

Scorpion Down: Sunk by the Soviets, Buried by the Pentagon: The Untold Story of the USS Scorpion