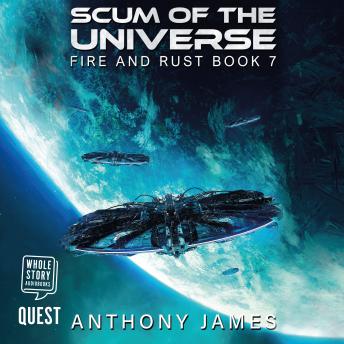 Scum of the Universe: Fire and Rust Book 7

Scum of the Universe is a fast-paced military sci-fi shooter filled with spaceships, guns, tech and warfare. It follows on from book 6 in the Fire and Rust Series: Nullifier and concludes the Fire and Rust series.
The Ragger and Sekar aliens have pushed humanity to the brink of annihilation. Two hopes for survival - genetic modifications to protect against the Sekar, and the death pulse generator - are years from completion. With no other choice, Fleet Admiral Stone is forced to make a deal with the devil in the form of a mutually beneficial exchange of technology with the back-stabbing Raggers. Naturally, the Raggers haven't changed. However, the aliens are about to discover that when humanity is pushed into a corner, anything goes. In a game of lies, threats and false promises, Stone must do what he can to come out ahead. If he fails, billions die.

Scum of the Universe: Fire and Rust Book 7