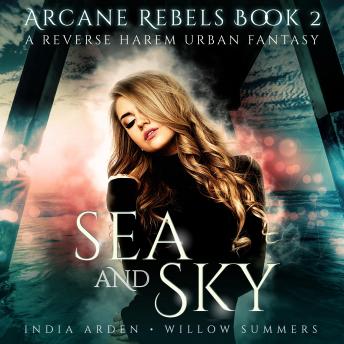 I really should be, since I just swallowed enough Arcanum to blow up every wannabe mage in the city. But instead, a brand new Arcane symbol is glowing on my solar plexus: the sigil of Spirit. And linking elements with my four Rebels even gets us out of my brother's compound alive.

Unfortunately, the current Arcane Masters aren't the only threat we're facing. With our newly heightened senses, we uncover a nasty piece of Arcane technology that's been blighting the city's water supply for a whole generation.

Amid all the chaos, I've somehow gone from a lonely, cloistered existence to a romantic involvement—not just with one fierce Rebel, but two. Bonding with the Rebels connects us all in a profound way that stretches far beyond the physical. Rain and Zephyr—Water and Air—are closer now than ever. Their touch can call down a mighty storm…or call up some seriously complicated feelings.

Ember is suffering in silence to see me with Rain and Zeph instead of him. Not Sterling, though—he's intrigued.

I have no idea how to navigate the tangle of our relationships. The Arcane powers we stole are just as confusing. They didn't come with a user's manual, and just when we think we've got a handle on our talents…

We realize we're not invincible after all.

Urban Fantasy fans will adore this medium-burn Reverse Harem filled with action, intrigue and magic. If you enjoyed Fire's Daughter, don't miss Sea and Sky, the second book in the Arcane Rebels series.