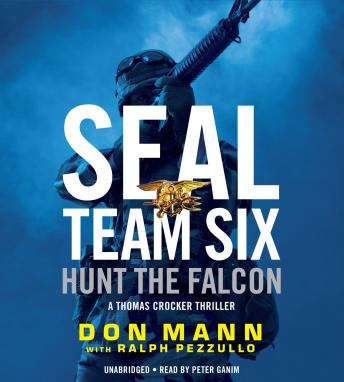 #3 of A Thomas Crocker Thriller

SEAL Team Six and Thomas Crocker are back hunting their most elusive adversary yet: The Falcon.

SEAL Team Six operative Thomas Crocker is no stranger to missions of the highest national importance and the gravest danger. But this time, the mission hits close to home. The Iranian terrorist he and his squad are chasing is the same man who kidnapped his wife months before -- the Falcon, who has been stealing Libyan nuclear material and is laying plans for a devastating attack against America. The hunt takes the team from Bangkok to Caracas in hot pursuit of the Falcon and his forces.

Meanwhile, Corcker's estranged father -- a former firefighter and hell-raiser who was kicked out of the Nacy as a young seaman -- reappears, forcing Crocker to acknowledge his life outside the shadows of SEAL operations. Doing so isn't easy when duty calls over three hundred days of the year, and when it's this essential to take an enemy down.

Hunt the Falcon ups the ante for Crocker and the rest of SEAL Team Six as never before. The bullets fly, the action is relentless, and by the end Crocker and his crew will be put to the ultimate test: surviving captivity under the most depraved of men and taking the fight to the Falcon's doorstep, deep in the heart of Iran.

I know the book is fictional, but the character came off as a superhero. Seemed like a fantasy