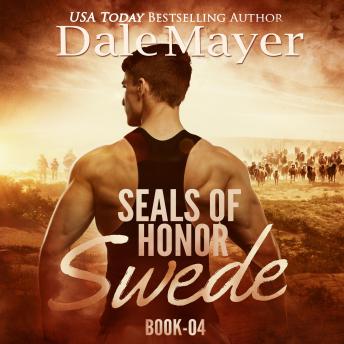 Book 4: Seals of Honor
His fellow SEALs have lost their hearts one by one while murder gets in the way of the promise of finding his own true love. Swede is on the lookout for his perfect mate, but if it'll happen is secondary to when considering that he's deep in the wilds of Mexico hunting a rebel training camp. When a group of civilians wanders into the middle of his operation, Swede is stunned to learn a woman he long ago decided was completely wrong for him is in the very place his team is setting up an extremely dangerous mission.
Eva loves animals, especially those in need. When a friend requests her help transferring a herd of horses from Mexico to new homes, she jumps at the opportunity...and lands herself in trouble. Swede is an old "frenemy" and he's determined to extricate her to safety before the rebels show up. Even as he works to shelter her, she struggles to protect her heart from him a second time. The rebels have plans of their own-one that isn't likely to involve a happily-ever-after in Swede and Eva's futures.