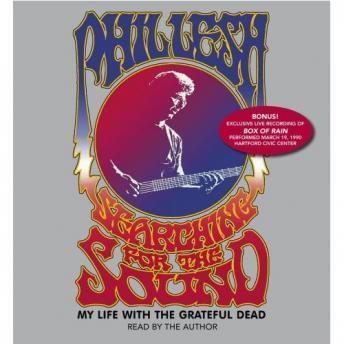 Phil Lesh first met Jerry Garcia in 1959 in the clubs of Palo Alto, California. At Garcia's suggestion, Lesh learned to play the electric bass and joined him in a new group that blended R & B, country, and rock 'n' roll with an experimental fervor never before heard.
In time for the Grateful Dead's fortieth anniversary, Phil Lesh offers the first behind-the-scenes history of the Dead. Lesh chronicles how the Dead's signature sound emerged, flowed, and swelled to reach millions of devoted fans, from their first gigs at Frenchy's Bikini-A-Go-Go for an audience of three, to the legendary Acid Tests, to packed stadiums around the world.
In San Francisco during the Summer of Love, at Woodstock, Altamont, and the Great Pyramids of Giza, the Grateful Dead have been at the center of some of rock's defining moments. Phil Lesh recounts what it's been like to live at the heart of this whirlwind--impressing Miles Davis and Dizzy Gillespie, sharing the stage with Bob Dylan, Janis Joplin, and the Rolling Stones. Lesh describes what it was like to storm heaven night after night--and the price he and others have paid. Bad management, drug addictions, depression, and insecurities persistently plagued the band members and would culminate with the most tragic blow of all--the death of Jerry Garcia.
Searching for the Sound is a ruthlessly honest look inside one of the greatest American bands. It includes a bonus live recording of Box of Rain performed on March 19, 1990 at the Hartford Civic Center, Hartford Connecticut.
Look for The Complete Annotated Grateful Dead Lyrics 1965-1995 available in hardcover October, 2005 from Free Press.

An amazing story. A verbal "walking tour" through a time of change for our country told by someone who was immersed in the center of it. The music and history blended together make an incredible listen, especially for someone who was a bit too young to remember much of it. Also, some terrific insight to Phil. He musical diversity is broader than I knew. His story is amazing, whether or not you are a Deadhead. An absolute must for your wish list.