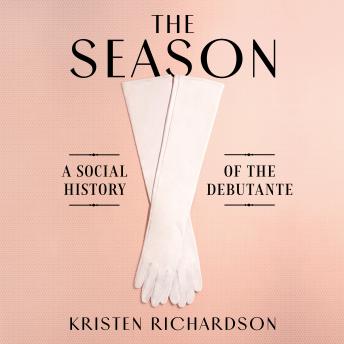 The Season: A Social History of the Debutante

Kristen Richardson, from a family of debutantes, chose not to debut. But as her curiosity drove her to research this enduring custom, she learned that it, and debutantes, are not as simple as they seem.

The story begins in England six hundred years ago when wealthy fathers needed an efficient way to find appropriate husbands for their daughters. Elizabeth I's exclusive presentations at her court expanded into London's full season of dances, dinners, and courting, extending eventually to the many corners of the British empire and beyond.

Richardson traces the social seasons of young women on both sides of the Atlantic, from Georgian England to colonial Philadelphia, from the Antebellum South and Wharton's New York back to England. She delves into Jazz Age debuts, carnival balls in the American South, and the reimagined ritual of elite African American communities.

The Season shares the captivating stories of these young women, often through their words from diaries, letters, and interviews that Richardson conducted at contemporary balls. The debutantes give voice to an array of complex feelings about being put on display, about the young men they meet, and about what their future in society or as wives might be.

Season: A Social History of the Debutante