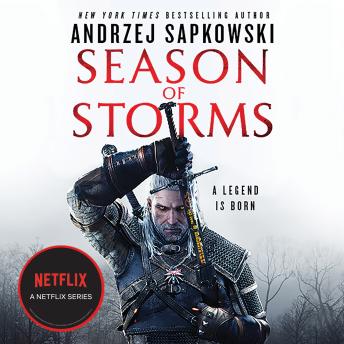 Before he was the guardian of Ciri, the child of destiny, Geralt of Rivia was a legendary swordsman. Join the Witcher as he undertakes a deadly mission in this stand-alone adventure set in the Andrzej Sapkowki’s groundbreaking epic fantasy world that inspired the hit Netflix show and the blockbuster video games.

Geralt of Rivia is a Witcher, one of the few capable of hunting the monsters that prey on humanity. He uses magical signs, potions, and the pride of every Witcher—two swords, steel and silver.

But a contract has gone wrong, and Geralt finds himself without his signature weapons. Now he needs them back, because sorcerers are scheming, and across the world clouds are gathering.

The season of storms is coming. . .

Hussite Trilogy
The Tower of Fools
Warriors of God

I’be listened to all of the Witcher books and enjoyed them. Getting to know the characters through the books was great, but the narrator is so talented it made many hours of listening a joy. I will certainly look for other books he has narrated.

Anither pretty good book with another great narration job. This book was a tad shorter than his previous books, but wasn’t drawn out with extraneous details either. This book takes place somewhere between The Last Wish and Sword of Destiny or thereabouts - it seems like sone events get jumbled up. In any case, bad luck falls upon Geralt and he must quest his way out of it with Danelions help. Overall, its a good story, decent action, supplements some events if the other series. I would still read this book last after the other main series however, don’t try to read it first or slip it in after the last wish. Main series, then come back to this one. Peter Kenny does another great as always with his usual cast of voices.

I absolutely love the Witcher series. Several months ago when I completed Lady of the Lake and was unhappily done with the series, I received an email from Hachette and saw this "prequel" of sorts was to be released soon, and I jumped at the chance to review it. I'm very glad I did. Before Destiny, before the bloodshed, before the drama and the politics and the confusion and the heartbreak, Geralt was just a witcher trying to make a living, and keep Dandelion out of trouble. That's what this book is about; Geralt doing his job, fighting monsters, avoiding confrontation, and sleeping with sorceresses. Good old-fashioned Witcher-ing. It was a bit short, and I wish it had been a little longer. The main plot revolved around Geralt getting framed and getting into trouble and losing his swords, and trying to do a job for a group of sorcerers in order to get his swords back (those darn sorcerers, always with their coercion and blackmail). The job is somewhat related to monster killing and somewhat political. The plot twist could have been more dynamic but it was still satisfying. The flow was a little piecemeal. A few of the audiobook scenes felt like they were repeating themselves, but then Sapkowski has a tendency to do that on purpose to make a point, so it could be an editing issue or it could be Sapkowski being Sapkowski. As always, Geralt and Dandelion and whatever dwafs involved were hilarious, sarcastic little snots, and I love it. And I loved the last chapter. I won't say anything about it but I absolutely loved it. I needed it

Loved this series but Season of Storms was meh