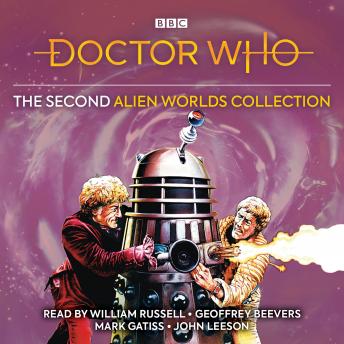 In The Sensorites, the First Doctor is forced into an uneasy alliance with a race of telepathic creatures from the Sense-Sphere. In Doctor Who and the Space War, the Third Doctor finds that a full-scale war between Earth and the planet Draconia seems inevitable. In Doctor Who and the Planet of the Daleks, the Third Doctor and Jo discover a vast army of Daleks waiting to mobilise and conquer on the planet Spiridon. In Doctor Who and the Ribos Operation, the Fourth Doctor, Romana and K9 embark on a quest for the first missing segment of the Key to Time, and in The Androids of Tara they become entangled in the politics of a planet on which androids are a vital commodity.

“…this always excellent range continues to delight in its pursuit of committing the entire Target Books library to audio.” Doctor Who Magazine