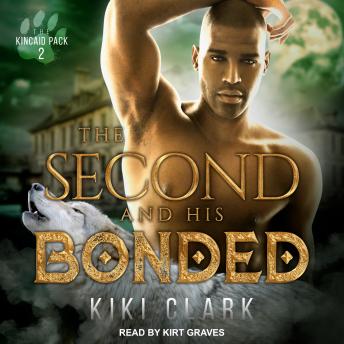 The Second and His Bonded

As the son of an enemy, Kieran never expected to find a family with the Kincaid Pack . . . or a true mate's bond.

After barely escaping his abusive family, wolf shifter Kieran McAllister struggles to find his place in the Kincaid Pack. Especially with the pushy but gorgeous second-in-command showing up every time Kieran turns around . . . and making him want things he shouldn't.

The traumatized wolf who continuously refuses Bennett Young's help has begun to haunt his dreams. But if there's one thing he knows, it's that tiger shifters don't have mates. So why can't Bennett get Kieran's sad eyes out of his head?

Despite their differences, Kieran and Bennet find something they never expected in each other. Just as their bond begins to grow though, Kieran's past threatens to destroy the very pack they both have been fighting to protect.

Excellent addition to the series! And great narration that adds to the story!

I love this pack that welcomes all and tries to make everyone feel like family. This entire series is good and this book to top notch and every bit as good as the first one. I fell in love with Bennett in book 1 and was very happy for him to find his mate. And poor Kieran! He breaks my heart at first. But this series is all about being strong and true to yourself and found family. I love it! And Kirt Graves does a lovely job of bringing these guys to life.

Kieran made my heart break in the beginning of his story, both because of the treatment he had to endure from his previous pack and because of how isolated he kept himself from the Kinkaids. He was so fixated on maintaining propriety that he didn't let himself get close to anyone, and I didn't realize how detrimental it was for his health until it was almost too late. Every time Kieran shied away from the pack's friendly overtures, my heart cracked a little more, but luckily Kai and his siblings were determined to become friends. It was wonderful to listen to Kieran open up little by little as he worked past his shame and emotional trauma, and by the end of the audio he stood tall with confidence and pride in his worth to the pack. Speaking of the pack, the Kinkaids certainly dealt with their fair share of unrest throughout this story. From council injustices to mysterious scentless threats and rival pack machinations, I was constantly on guard and worried about the safety of the characters I've grown to love. Kieran was particularly under the radar for his testimony against his father, and because he insisted on calling himself expendable I was worried he might do something rash in a misguided attempt to protect the rest of the pack. Thankfully Bennett wasn't about to tolerate any of that, and he made sure to stay by Kieran's side throughout it all. Their romance was slower to heat up than the previous book, but it was very worth the wait for how sweet and comforting their partnership ended up being. Kieran didn't need Bennett's protection, so the fact that he surrendered to his care anyway was even more satisfying. I devoured every second of their steamy nights together and could have listened to a dozen more, but there was too much going on in the pack storyline for these lovers to spend much time relaxing. The resolution of Kieran's personal journey was incredibly fulfilling, and despite the nebulous threat still lurking in the background, I felt triumphant and victorious over what he achieved.

Great story! I’m enjoying this series immensely. Kieran and Bennett are so cool together; the little wolf and the bangle tiger. My favorite part is when Kieran’s wolf goes to Bennett’s bungalow. Very emotional exchange of mating bites, loving and steamy all at once! The ebook was a solid 4 stars for me, but this audiobook definitely rates a full 5 stars!