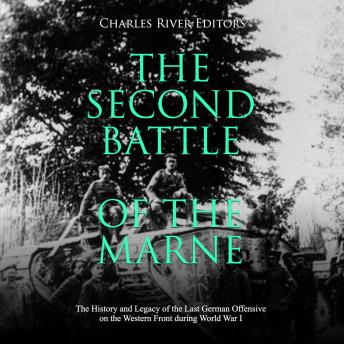 Second Battle of the Marne, The: The History and Legacy of the Last German Offensive on the Western Front during World War I

For much of 1917, things went the Germans’ way. With the Bolshevik Revolution underway, the Germans were able to move soldiers to the Western front as the Russians quit the war. Moreover, the Allied powers had failed badly in its Nivelle Offensive in May 1917 and suffered a defeat in November against at the Battle of Caporetto in Slovenia. Unbelievably, the French and British had not bothered to coordinate their commands until after those defeats, but they finally formed a Supreme Council to coordinate their armies’ movements and strategies. Despite those successes, when the United States joined the war in April 1917, it began mobilizing 4 million soldiers to join the war. The Central Powers knew that it would take months before the United States could land a substantial number of troops in Europe to join the fighting, and the Germans hoped to force the Allied powers to quit before the United States could make a difference. Thus, the Germans’ Spring Offensive began in March 1918, using new infantry tactics to move on the most lightly defended points of the Allied trenches. The Germans quickly obtained a breakthrough and broke the Allied lines, pushing the Allied forces back nearly 40 miles, and the Germans were once again within less than 100 miles of Paris. Once again, however, the Allied powers halted the Germans’ drive, with the help of reinforcing American and Australian troops. The Germans were right back where they started by July 1918, at which time about 10,000 Americans were arriving in France each day.

After four years of brutal, savage, and devastating fighting, the battle fought there in July 1918 marked the beginning of the end of the war as the Allied forces begin to put the German invaders on the run. In the wake of the victory, the Allied Powers began a counteroffensive known as the Hundred Days Offensive in August 1918 that was highly successful in pushing the Germans backward.

Second Battle of the Marne, The: The History and Legacy of the Last German Offensive on the Western Front during World War I

This title is due for release on May 31, 2020
We'll send you an email as soon as it is available!