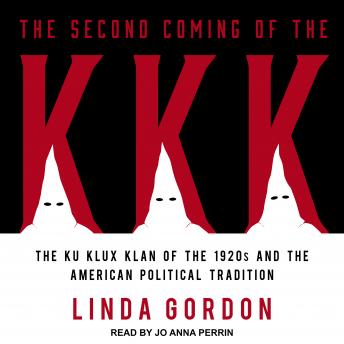 The Second Coming of the KKK: The Ku Klux Klan of the 1920s and the American Political Tradition

By legitimizing bigotry and redefining so-called American values, a revived Klan in the 1920s left a toxic legacy that demands reexamination today.

Boasting 4 to 6 million members, the reassembled Ku Klux Klan of the 1920s dramatically challenged our preconceptions of hooded Klansmen, who through violence and lynching had established a Jim Crow racial hierarchy in the 1870s South. Responding to the 'emergency' posed by the flood of immigrant 'hordes'-Pope-worshipping Irish and Italians, 'self-centered Hebrews,' and 'sly Orientals'-this 'second Klan,' as award-winning historian Linda Gordon vividly chronicles, spread principally above the Mason-Dixon Line in states like Indiana, Michigan, and Oregon. Condemning 'urban' vices like liquor, prostitution, movies, and jazz as Catholic and Jewish 'plots' to subvert American values, the rejuvenated Klan became entirely mainstream, attracting middle-class men and women through its elaborate secret rituals and mass 'Klonvocations' before collapsing amid revelations of sordid sexual scandals, financial embezzlement, and Ponzi-like schemes. The Klan's brilliant melding of Christian values with racial bigotry and its lightning-like accretion of political power now becomes a sobering parable for the twenty-first century.