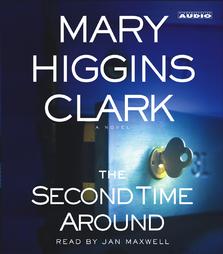 The Second Time Around: A Novel

The 'Queen of Suspense,' Mary Higgins Clark, delivers a gripping tale of deception and tantalizing twists that could have been ripped from today's headlines.

When Nicholas Spencer, the charismatic head of a company that has developed an anticancer vaccine, disappears without a trace, reporter Marcia 'Carley' DeCarlo is assigned the story. Word that Spencer, if alive, has made off with huge sums of money—including the life savings of many employees—doesn't do much to change Carley's already low opinion of Spencer's wife, Lynn, who is also Carley's stepsister and who everyone believes is involved. But when Lynn's life is threatened, she asks Carley to help her prove that she wasn't her husband's accomplice. As the facts unfold, however, Carley herself becomes the target of a dangerous, sinister group that will stop at nothing to get what they want.

I loved this book. It was very suspenseful and kept you guessing. I love MHC as an author. She completes the story. I would read any of her books.

I should have paid closer attention to other people's ratings before I put this on my rental shelf. It's bad. And by bad I mean NOT at all good! The narrator sounds like a Sunday school teacher who's trying to work a 900-number date lines. It's just not convincing, and the writing overall is bad.

Both Mary and Carol Higgins Clark write very good mysteries. I find both of them to be formulaic, but I usually enjoy the story even thought I usually figure out the killer long before the end. The writing is always sharp and witty.

I found this story to be a slow-starter but picked up. I was never sure who was the guilty party until the end. I would say the characters were believable.

Mary Higgins Clark is always a good read. I loved the story!!!

Dumb beyond belief . . . one vaccine to cure all kinds of cancer and birth defects, too . . . Author tries to lead reader emotionally instead of allowing reader to develop emotions as a result of what happens.

I was unimpressed with this story, and even less impressed with the narrator. No surprises here, fairly predictable, and although you are kept in suspense throughout the story, the end didn't give me that "Oh my god!" feeling. The narrator really didn't help the situation either.

This title is due for release on April 15, 2003
We'll send you an email as soon as it is available!